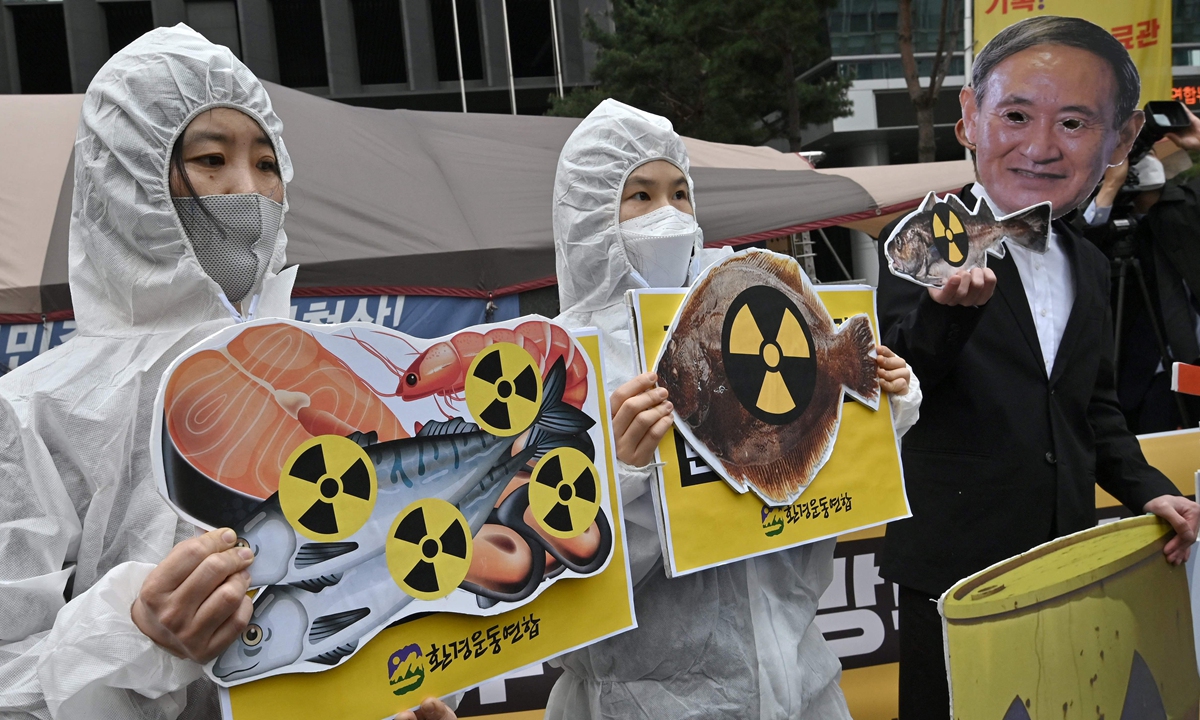 China and other countries neighboring Japan expressed grave concern to the Japanese government’s decision of dumping Fukushima radioactive water into the ocean.

China and South Korea on Wednesday expressed firm opposition to Japan’s decision to dump nuclear wastewater into the sea, at the first meeting of China-South Korea dialogue on maritime affairs mechanism held via video link. The two countries urged Japan to consult international organizations and neighboring countries, and carefully deal with the wastewater issue. 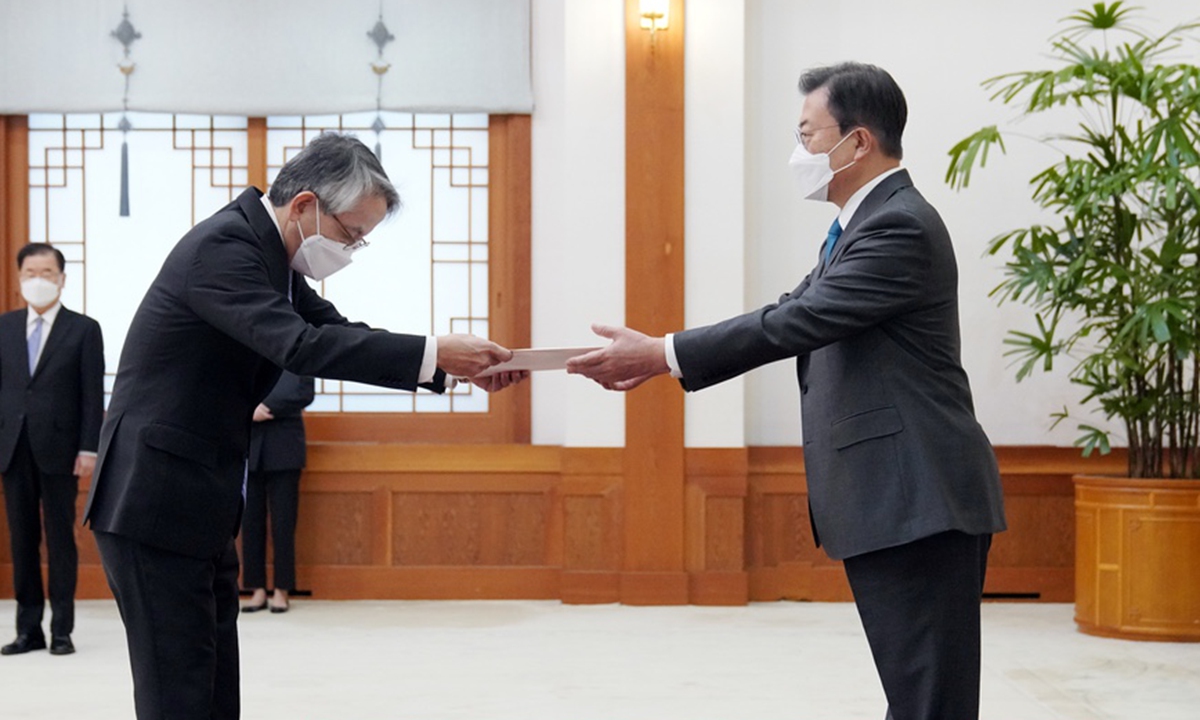 South Korean President Moon Jae-in (right) receives the credentials of Japanese Ambassador to Seoul Koichi Aiboshi at the presidential office in Seoul on Wednesday. Moon told the Japanese envoy that South Korea was deeply concerned about Japan’s decision to dump Fukushima wastewater into the sea and requested the ambassador to convey his position to the Japanese government. Photo: cnsphoto

Russian Foreign Ministry also expressed its great concerns over the issue in a statement on its website late Tuesday. It urged Japan to be transparent and to inform relevant countries over the radiation threats. Russia also hopes Japan to further explain its decision and allow external monitoring of the radiation, according to the statement.

Zhao raised three questions to the Japanese government at the press conference: Has Japan really considered the doubts and concerns at home and abroad? Is the move really in accordance with international law? And, does the radioactive wastewater to be dumped to the ocean really meet international standards?

Japanese media reported that the wastewater dumping is scheduled to start in two years and last for 30 years. Japan plans to dump more than 1 million tons of radioactive wastewater, which is unprecedented in terms of quantity, duration, geographical scope and risk level, Zhao noted.

Japan should not let the world pay for its decision over the radioactive water, said Zhao.

As a Japanese official said that the water would be fine to drink, “ask him to drink first,” Zhao rebutted.

Some of the local people in Japan have not yet healed from the Minamata disease, and Japan should not forget this historical tragedy, stressed Zhao.

He said that Japan should reexamine the disposal of the wastewater and refrain from initiating the discharge before fully consulting and reaching agreement with other stakeholders and the International Atomic Energy Agency (IAEA).

China reserves the right to make a further response, he noted.

According to Zhao, some lawmakers from Japan’s ruling party said the decision was ill-considered, as the radioactive water should be stored for a long time rather than dumping it. Also, the Japan Fisheries Association said in a statement of protest that the decision would be a “heavy blow” to Japan’s fishing industry and absolutely unacceptable.

On Tuesday, Tokyo, Fukushima and other areas in Japan witnessed street protests where local residents held signs such as “The ocean is crying, the fish are crying, and the Earth is crying.”

In addition to China, South Korea, Russia and the EU, another 311 environmental groups expressed their firm opposition to the Japanese government’s decision, Zhao said.

Greenpeace, a nongovernmental organization on environmental protection, criticized the decision, saying that although Japan has the technology and conditions to build more tanks to store the wastewater, it has chosen to dump the water into the Pacific Ocean, which is totally unjust.

Citing the United Nations Convention on the Law of the Sea (UNCLOS), Zhao said countries should take all necessary measures to ensure pollution is within their jurisdiction or control and does not extend beyond their sovereign areas. Japan as a contracting country of the UNCLOS should be aware of this, Zhao said.

However, due to ocean currents, migratory fish and other factors, the dumping of the Fukushima nuclear wastewater will inevitably result in  cross-border impacts.

Zhao stressed that the US’ permission to the dumping of the wasterwater is not the same as the permission of the international community.

Since the US attaches great importance to environmental issues, it should earnestly shoulder its responsibilities and urge Japan to take an honest, scientific and responsible attitude and prudently deal with the disposal of the Fukushima wastewater, instead of failing to distinguish right from wrong, ignoring principles and adopting double standards, Zhao told the press conference.

In addition, the assessment report of the IAEA clearly pointed out that the treated wastewater at the Fukushima nuclear power plant still contains radionuclides, Zhao said.

Canada has detected radioactive elements in salmon on its west coast, according to media reports. Levels of radioactivity have doubled in waters off Hawaii in the US. Signs indicated that contamination from the Fukushima nuclear disaster in Japan may have spread to North America, Zhao noted.

In a move that startled people all over the world, Japan has decided to dump radioactive water from Fukushima into the sea. But netizens have been surprised by the relatively muted coverage of it in mainstream Western media.

The New York Times published one article on it that expressed relatively little alarm, while The Washington Post stressed that Japan will release the water “after treatment,” in an apparent effort to justify Japan’s decision, netizens said. “The United States lent its support to Japan’s decision but China and South Korea were unhappy,” the report said.

The topic “the Western media are almost silent this time” was trending on Chinese Twitter-like social platform Sina Weibo, and has been viewed 74.8 million times as of press time. There was also a widely circulated question on Chinese social media on Tuesday: “How would Western media cover it if it were China dumping nuclear waste into the sea?”

The mainstream Western media often has critical opinions in reports on international affairs but the claws were put away even though Japan’s decision apparently disregards wider human interests, netizens said.

“You keep pointing fingers on the Xinjiang issue, spreading rumors on Xinjiang’s cotton, but you lost your voice on pollution that affects all of mankind,” one netizen said, noting that this example should “forever be nailed to the hall of shame of human conscience!”

Many noted that Western NGOs dedicated to human rights or environmental protection, which have long targeted China, have kept silent over the Fukushima water issue. “Shame on them,” read a typical comment.

“After Washington backed Tokyo on the Fukushima water disposal, which other Western countries dared to express objections? None!” said a netizen.

Some netizens also mocked Swedish environmental activist Greta Thunberg, saying “where is the ‘environmental-protection ambassador’? Why is she so silent on the issue?”

In fact, Thunberg on Tuesday only forwarded the news of the Fukushima water disposal and retweeted the decision without any comment, like most Western media, in contrast with her public image of being very sharp-tongued on environmental protection issues.
– Global Times
Dangers of dumping radioactive Fukushima water into the seaBy Wu Tiantong – Global TimesPublished: Apr 14, 2021
https://www.globaltimes.cn/page/202104/1221062.shtml 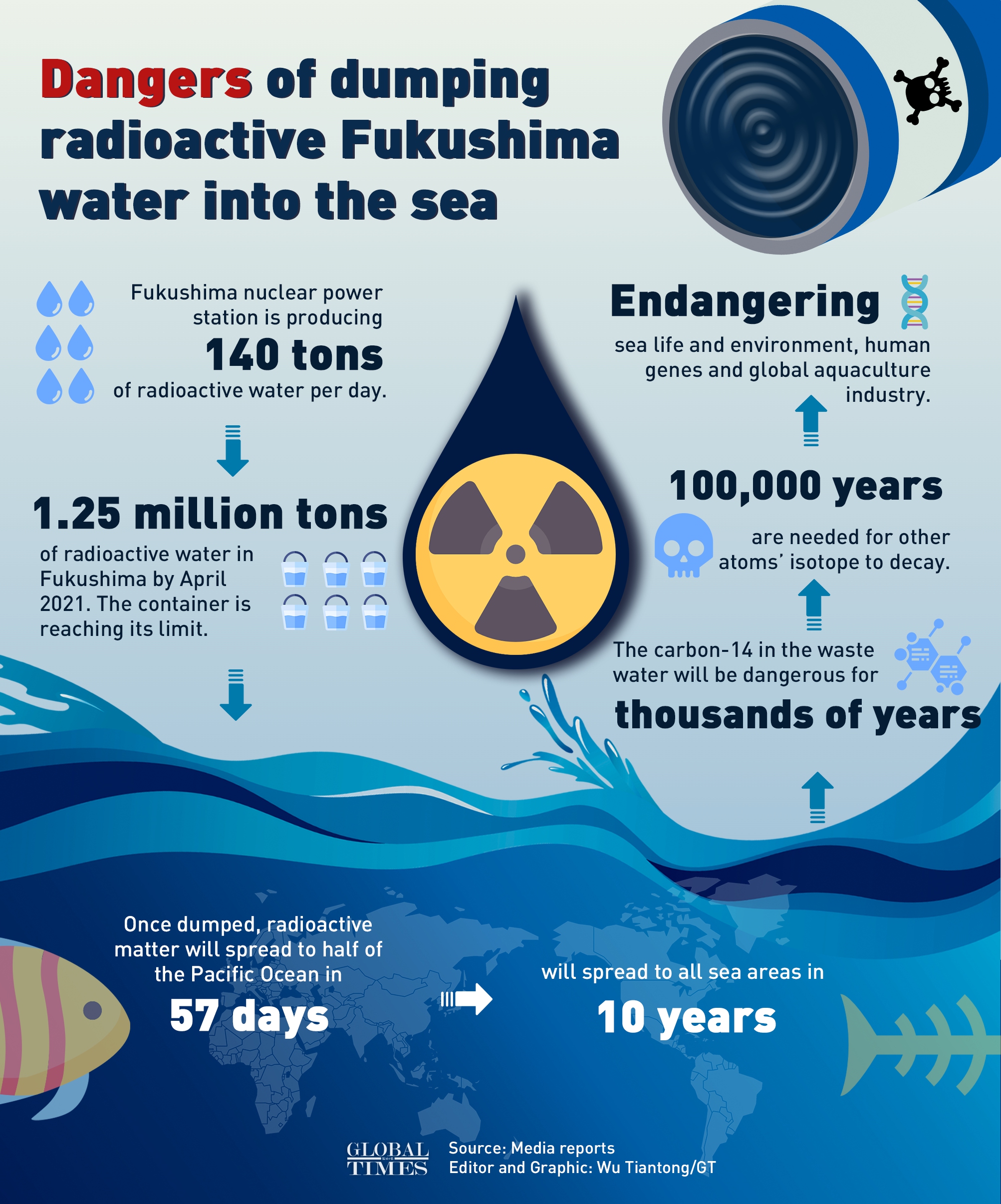